The post-graduate lifestyle is not so bad. Working part-time, I now have time to enjoy summer, read for recreation, watch films, and even think. 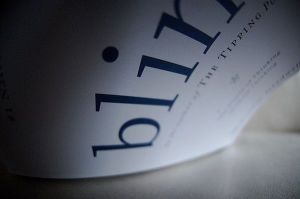 Blink: The Power of Thinking Without Thinking

Recently I read the book Blink: The Power of Thinking Without Thinking, by Malcolm Gladwell. The book is an exploration on rapid cognition. It’s a collection of case studies that break down mental processes which allow people to make decisions in a blink. Everyone does this naturally– we pick up non-verbal cues to base first impressions. We read people. The book opens with art historians deeming a sculpture “fake” upon one glance, and shifts into some heavier subjects such as military tactics, falling in love, gambling, and marital experts who can judge a relationship “doomed” within minutes. It explores some marketing studies too: Coke and Pepsi comparisons in a blind taste test, and the effects of packaging between margarine and butter. It also addresses racial profiling and walks the reader through the minds of police officers in a case of a 1999 unjustified shooting in Brooklyn. From the trivial to the issues of utmost importance, people use judgment to make decisions- and use it quickly. Gladwell calls these snap decisions “thin slicing.” We are given a little data and fill in the rest with preconceived notions and biases.

Some believe themselves to be exempt from bias. “I’m completely objective and rational.” Hmm… I think some people work harder to suppress their initial intuitions, but clearly all people were equipped with feelings and common sense in order to survive. Our comprehension is finite by nature, so it makes sense for intuition to be a somewhat reliable means to insight. “Thin slicing” can probably lead us to some sort of objective knowledge. Hopefully we have evolved past relying solely on feelings, but the message I took from the book is to combine rationale with intuition.

I also just saw the movie Crash. Talk about split-second decisions and prejudices. I think it’s good to address issues of stereotyping rather than ignore them. Crash, much like Blink, is all about putting yourself into someone else’s frame of reference and train of thought to better understand things.

I won’t spoil it; Blink leaves the reader with a call to action: to think critically and act wisely given whatever circumstances. You have gut-reactions and also a brain. So use them both. We have the power to prevent foolish decisions if we take those extra steps and seconds to fully cognize information, rather that act instinctively. It’s a really good read, and apparently a movie is in the works for this year starring Leonardo DiCaprio. It made me want to read Gladwell’s The Tipping Point too.